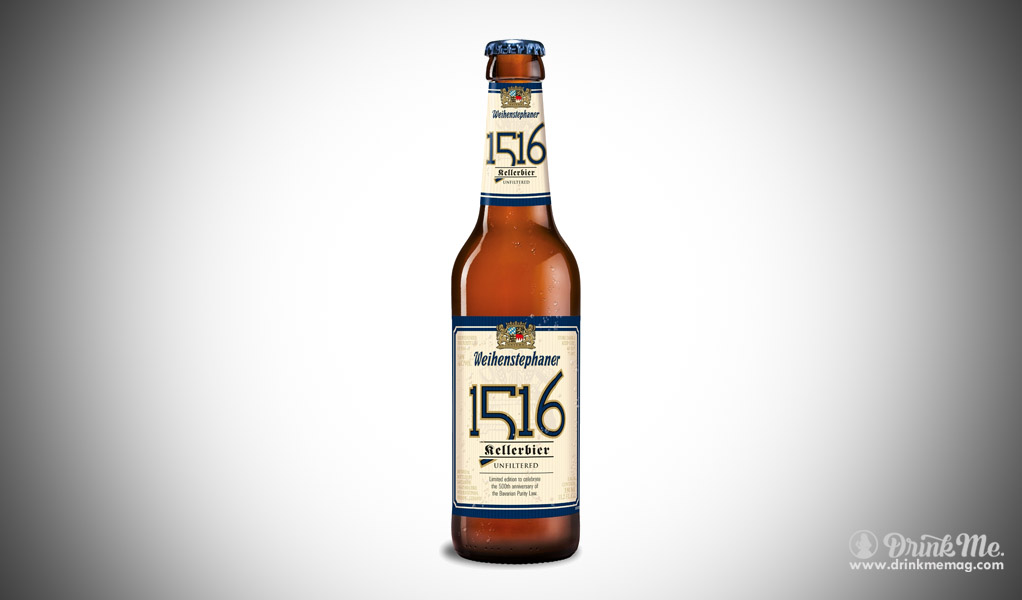 In 1516 Bavarian law established the Reinheitsgebot, literally “purity order”, but often loosely translated into English as the “German Beer Purity Law”. This law, in which Germans rightfully take great pride to this day, not only limited the allowable ingredients in all beer produced in Germany to simply barley, hops, and water; it also set limits on the pricing of beer and the profit margin innkeepers and tavern owners were allowed. Beer had to be pure, and it had to be affordable—a concept we would ratify globally if we could.

German Brewery Bayerische Staatsbrauerei Weihenstephan, or Weihenstephaner as it is more commonly known, has recently released a new beer called 1516 to commemorate the 500-year anniversary of the momentous occasion of the establishment of the Reinheitsgebot law on beer purity and price. 1516 is a kellerbier, a term that hails from the days prior to refrigeration when beers were kept in cellars dug into the hillsides (kellers) in order for them to stay cool. The beers were unfiltered because that was the original brewing process, but the term has been adapted today to define unfiltered lagers produced mainly in Franconia, but sold all across Germany.

The bishop-granted brewing license the brewery holds to prove its 1040 AD start-up date has been good-naturedly contested, but Weihenstephaner’s position as the oldest brewery in the world is accepted universally. One thing is for certain, these brewers know what they’re doing, and 1516 is an excellent lightly cloudy lager brewed in classical style.

It pours with a lovely creamy, frothy head and exhibits spicy notes sourced from the rare hop Hallertauer Record with which it is brewed, balanced with refreshing lemon notes, touches of fresh-baked bread and herbal notes of cloves and fresh-cut grass. 1516 is a fitting tribute to Reinheitsgebot, exhibiting pure, delicious traditionally brewed flavors at a reasonable price.

Previous post Weird But Wonderful: Five of the Strangest Whiskies In Existence