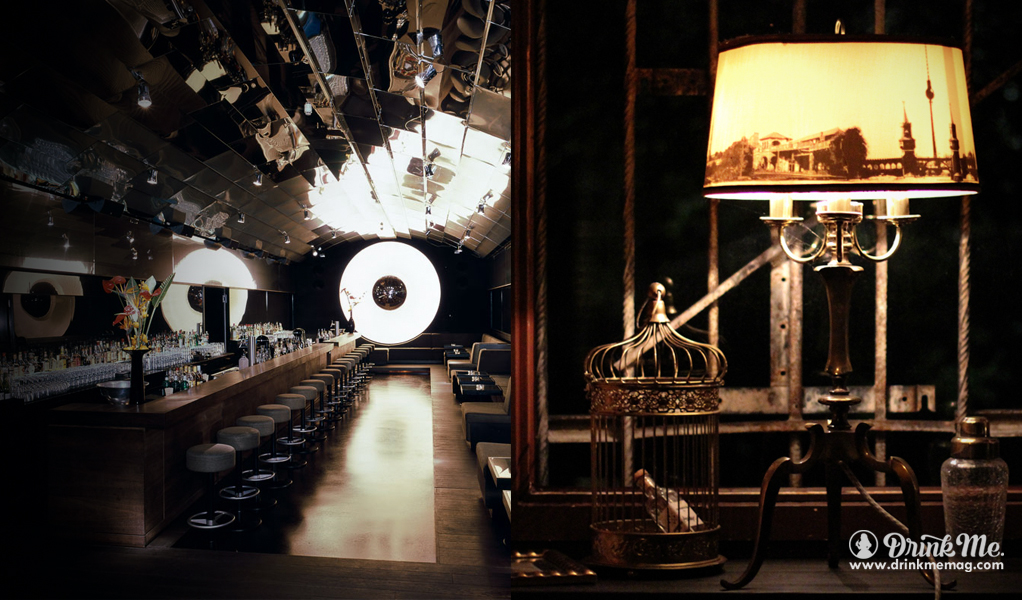 Everyone knows that Berlin is cool. But the particular essence of that “cool” is something a bit more complex and a lot less self-conscious than other cities with such reputations. Berlin isn’t striving for the title, it just likes what it likes and is still enthusiastically whirling and expanding out from its own big bang—namely, the reuniting of east and west and the fall of the Berlin wall.

Where the rest of Germany is efficient, coordinated polite and well groomed – Berlin is gritty and unruly and exuberantly tattooed with graffiti. It is also a city wrought with decades of bleak hardship and traumatic memory, giving it realism and a scrappy survivalist “make-do” instinct.

There is no place as haunted by the remnants of subterfuge—long passageways and unmarked doors, false entrances and beers sold from a fridge in a backyard but poured into glasses on a table of the building next door, arrived at through a break in the wall.

Located on a quiet, residential block in Mitte, one of the trendier neighborhoods in former East Berlin, Reingold’s foreboding front door is not only unmarked, it is locked. Like a school kid goaded into a dare, I cautiously rang the bell. The door opened and a smart, young waiter in 1920’s garb guided us inside. A large, eye-catching print of a couple in matching ties presided over one end of the space, while the languidly long, minimal bar seemed to stretch on forever. It was early still for the notoriously night-owlish city, and the bar was only partially occupied by a handful of aloof and well-dressed corporate types (also in matching ties). Lucky for us, this meant we had the bartender’s full attention. I challenged the bartender to a Singapore Sling, the original tiki drink. Boozy and complex with just the right amount of exotic, Cheery Heering sweetness, the Singapore sling at Reingold suddenly seemed like the ideal way to begin a night of drinking in Berlin. I ordered another.

Because it is Berlin, where every culinary delicacy is designed to pair with beer, the mouth watering smells wafting relentlessly down the streets of Mitte reminded me it was time for dinner. Nearby, Restaurant und Bar Keyser Soze (yes, as in Kevin Spacey in the Usual Suspects), is the ideal place to tuck into a wholesome, satisfying meal. Sitting at a picnic table, chowing down on the most excellent homemade spaetzle, I watched the sidewalk show: provocatively dressed prostitutes parade their clients one after another from the corner, past the restaurant, to the doorway of a cheap hotel across the street.

Back into the nacht, I headed towards the S-Bahn train line station. I followed the platform to its very end, went down the staircase, crossed the road, and stopped short in front of yet another foreboding, huge metal door under what appeared to be the deserted tunnel of the S-Bahn. How on earth anyone might stumble across this unmarked entrance is, I guess, the whole point.

A ring of the bell, however, and a concrete slab of a man in a tuxedo gruffly opened the door to Bar Tausend. Giving me a thorough once over, he let me in quite begrudgingly. But then again he might’ve just been German. I’d heard about a dress code at this spot—currently THE place to see and be seen in Berlin, despite the ironic fact that it’s a “hidden” bar—but the once over seemed more perfunctory than enforcement.

Once inside, the place emerged like something a German expressionistic filmmaker might’ve imagined the future to look like. The long, narrow room of curved, steel walls mimics the shape of the tunnel it calls home. A huge, fish-eye mirrored lighting fixture commands the entire end of the space, while the other end is reserved for live music.

A statuesque model of a dreaded blond server attentively guided me in my drink selection, as he leaned his lanky body towards my table with relaxed friendliness. He recommended the Moscow Mule, noting the fresh ginger beer made in house. I was not disappointed. Glass drained, I soon headed towards the Kreuzberg neighborhood.

By the time I got off the train, I was starving and already visualizing the Sudanese falafel that a friend of mine had recommended. The hole in the wall, called simply Nil, is the late night craving indulgence to end them all. Dirt cheap and hugely generous, the falafel is simultaneously light and crisp and sumptuously rich. Have them drizzle copious amounts of every sauce they have at hand onto your plate piled high with North African salads and dips.

Thoroughly satisfied and only a few euro’s lighter, I more or less floated the two blocks to my final destination: Schwarze Traube.

The owner and original Berlin hipster lumber jack, Atalay Aktas won the award for best mixologist in Germany a year back, so this place is hardly under the radar. Still, I found a locked and nearly unmarked door—just a simple sign advising, “Please knock and smile.”

On the other side of the door, what seemed to be three distinct but interlocking tiny bars spread out before me. The black wallpaper with golden fleur-de-lys over bare brick set off the quirky details that greeted me as I nosed around the space. Singer sewing machines strewn here and there like the toys left by a lazy child, oversized, gilt-framed mirrors and vintage baubles almost made me feel like I might stumble over a bottle inscribed with the instruction, “drink me.”

There are no menus but plenty of conversation as the bartenders at Schwarze Traube listen attentively as you describe your mood and taste preference before dispensing their drinks crafted with house-made syrups and tinctures and their vast array of high end and hard to find bottles.

The Sudanese pit stop had me feeling rather like a modern day Hemmingway, and relaying the notion to my bartender, along with my penchant for very dark and very rare rums, he delivered his take on the classic daiquiri, using dark brown sugar to yield a deeper, almost brooding character. It was perfectly suited to ending the night solo and ponderous.

As I sipped the cocktail, I took in my surroundings—the peeling paint and wallpaper, the enormous hunk of ice behind the bar, the antique stemware, and the jagged-edged holes in the walls. Haunted and complex but youthfully enthusiastic, just like the city that surrounded it—it was, in fact, perfectly Berlin.

About the Author Ava Fedorov

Ava Fedorov is a New York based illustrator/artist with a knack for turning a phrase. An avid explorer, her curiosity has lead her from Bogotá to Budapest to Ulaan Baatar—drinking life’s sweet cocktails along the way and always thirsty for more. Ava has nearly a decade of published work in a variety of publications and is the author of Book of Fears (Ugly Duckling Presse, 2008), a book of illustrations.