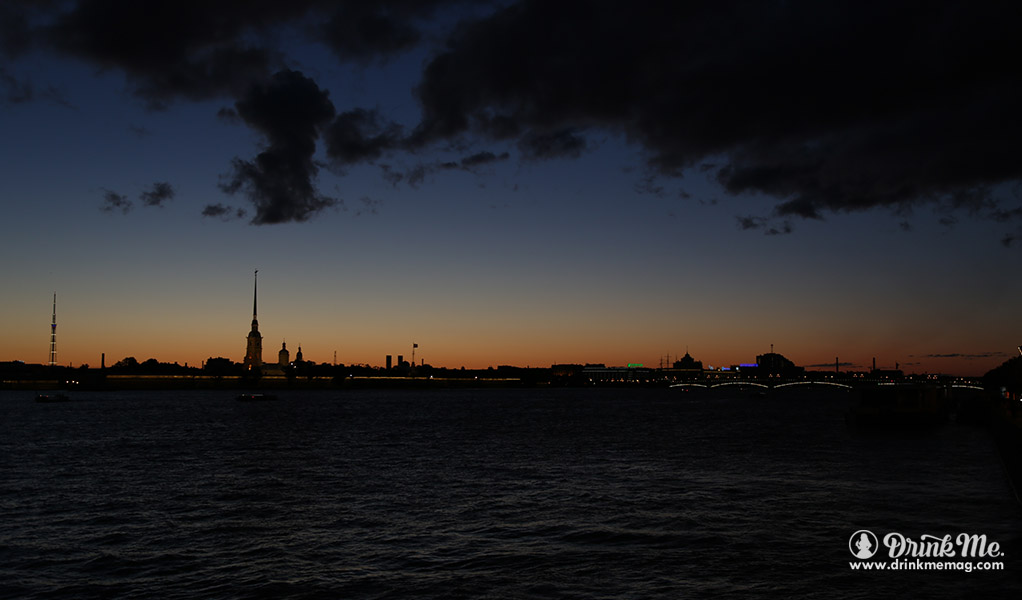 St Petersburg is a dazzling destination: a World Heritage site intertwined with canals and home to the internationally renowned Hermitage museum, there’s a lot to take in. The most European of Russia’s cities, its location has always caused it to look to the west, and this inspiration is clear in the classical and baroque architecture and cafe-culture of the canal-side bars.

In the evenings however, this is a city that knows how to unwind. The mid-summer White Nights when the sun barely sets, give the city a summer-long festival feel and it’s not uncommon for the locals to gather in the middle of the night to dance, drink and cheer as each of the city’s central bridges rises in turn.

Arriving on the national Russia Day public holiday meant we trekked into the heart of a town in long weekend party mode. The bars and restaurants were full, but we found a table on the terrace at Schastye on St Issac’s Square. One of a small chain in town and conveniently located right next door to our hotel, this stylish French/Italian cafe welcomed us to town with Prosecco, tapas and local beer with a view of the majestic St Isaac’s cathedral.

Our next morning dawned sunny and bright, and with at least 18 hours of daylight to enjoy we headed for a walking tour of the major sites, taking in the Admiralty and Hermitage and over the Neva to explore the Peter and Paul Fortress on Vasilevskiy Island, the historic heart of the city. Back in the centre of town we skipped past the crowds outside the magnificent Church on Spilled Blood and instead, in need of a tea break, dropped by the Literary Café.

This quirky spot has seen many of the city’s literary greats come and go during its two hundred year lifespan. The tearoom maintains its nineteenth century style, and is home to a waxwork figure of Alexander Pushkin which commemorates the site of his last meal before his twenty-ninth and final duel in 1837.

For dinner we headed north to the burgeoning Petrogradskaya Storona in one of the city’s super cheap Ubers and enjoyed a fine Italian meal at Capuletti. Located in a former cinema, a welcoming atmosphere has been created by making use of exposed brickwork, elegant plaster mouldings and a few unique windows. The house specialises in seafood and the pasta was as fine as any you’d find in Rome.

After dinner we Uber’d back to the city centre to visit Alexander at Borodabar, a casual and industrially styled bar with bright furniture and street art on the walls. We took a table near the bar and enjoyed an alder-wood old fashioned and basil gin smash before a round of garlic, dill and horseradish shots set us on our way to the next stop.

An old-timer of the St Pete’s bar scene, 812 is credited with bringing the craft cocktail back to St Petersburg. We sat at the copper-topped bar and struck up conversation with the locals and ex-pats that make this their second home. Under the light of the Campari chandelier we enjoyed some sweet concoctions until the time came to roll home to our hotel.

Restored by breakfast at Hotel Angleterre, we took to the river and enjoyed a windy crossing to Peterhof on one of the hydrofoils that sail down the Neva and Gulf of Finland to Peter the Great’s Kingdom of Fountains. On our return to the city we headed for some retail therapy at the Great Gostiny Dvor the pre-revolutionary shopping mall that has been the centre of St Petersburg’s mercantile activities since the eighteenth century and picked up a couple of Soviet era cameras for a handful of change.

Dinner that evening was at The Idiot, a spacious basement restaurant on the Moyka canal. Named after the famous Dostoevsky novel and once one of the few vegetarian restaurants in the city. The Idiot has now branched out to a more carnivorous menu and greets each guest with an ice cold shot of vodka. A homely and mismatched interior with antique furniture and oil paintings makes for a cosy stay and the menu has Russian classics executed perfectly and at reasonable prices.

Post-dinner drinks on day two took us back to Ulitsa Zhukovskogo, a sensible stopping point for a single street bar crawl with four of the cities renowned bars within striking distance. Our first stop was Tipplers where we perched at one end of the four ton metal bar and had a chat with owner Alex and barmen Igor and Alexey who were keen to show us their favourite drinks and tricks including the use of a blowtorch and piece of Vesuvian rock to infuse bitters into the Antagonist whiskey and plum brandy cocktail. The Zorka Julep with willowherb tea was also a popular choice and again we finished off our visit with homemade tinctures of pineapple and garlic or raspberry.

A short hop across the quiet street took us to Dead Poets where we pulled up a stool and spoke with Anton, part-time bartender and part-time guitarist in Russian punk rock band PTVP. Dead Poets is a Manhattan style bar which serves as a home to over eighty bottles of whisky and a sophisticated cocktail menu.

Despite the Russian reputation for heavy drinking and ice cold vodka we found that not far below the surface there exists a cultured drinking scene featuring grown up bars creating unique concoctions that can rival London and New York for their imagination and execution.