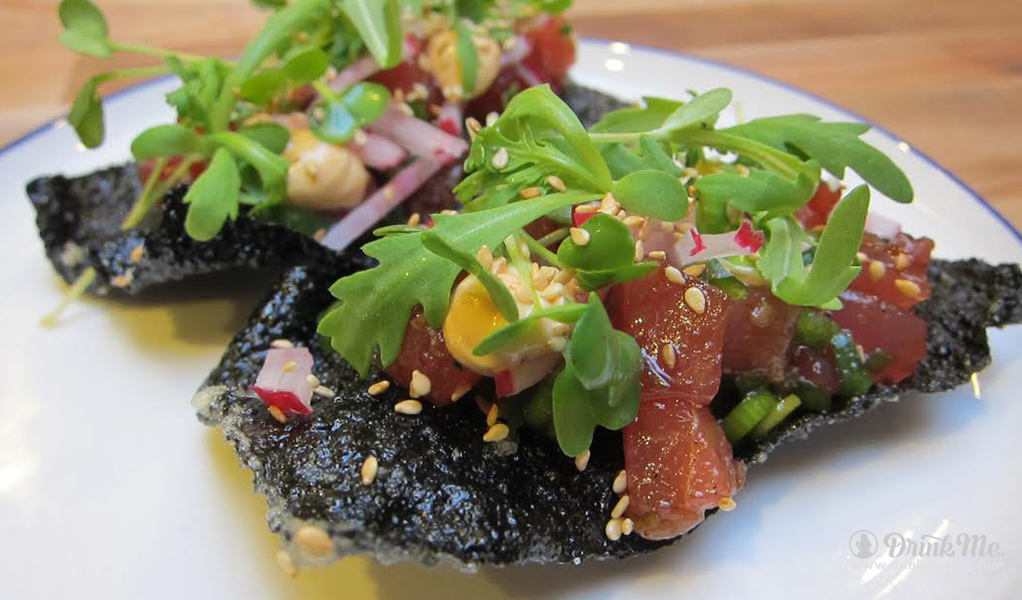 Nestled into a subtle inlet on the south side of Sutter Street in between Jones and Leavenworth, you will find white beehive tiles on the floor with the word ‘Aloha’ spelled out in blue tiles. Pull the door open, step inside and bask in the tantalizing ambiance of Hawaiian inspired cuisine made from California ingredients. Masterminding the heritage driven food are renowned veterans of the restaurant world: Chef Ravi Kapur (formerly of Boulevard and Prospect) and Nopa partners Allyson Jossel and Jeff Hanak.

So what exactly sparked the idea for Liholiho Yacht Club? After spending well over a decade working in San Francisco’s fine dining scene with a focus on French and Californian cuisine, Oahu native Chef Ravi decided to take some time to visit Hawaii where he was happily reunited with his culture. But it wasn’t until shortly after that with the birth of his son Makao that he realized what he really wanted to do – honor his Hawaiian heritage, make the food he grew up with, and to share these culinary experiences with the San Francisco restaurant scene. After bumping into his longtime friend and restaurant owner Chris Beerman, Ravi decided to kick start his idea by running pop-ups; first at Chris’ restaurant Citizens Band, and then at local hotspots State Bird Provisions, Naked Kitchen, Contigo and Mission Bowling Club.

And then there’s the inspiration behind the name… Back in Hawaii during the early 80’s, the Kealoha uncles began hosting island parties where they’d simply show up at the beach, fire up the grill, and prepare the food as patrons enjoyed a live band while sipping on ice cold beers. Becoming so popular that they needed a name for these parties, the brothers decided to name them after the street they lived on – Liholiho Street. And since the parties were truly just a means of funding their love for Hobie Cat racing, they put a little Hawaiian-style humor in it and decided to call it the Liholiho Yacht Club.

Fast forward 30 years and right here in San Francisco we can enjoy the splendors of Chef Ravi’s Hawaiian influenced menu in their brick and mortar that opened earlier this year. And with a great wine and cocktail program to supplement the experience, you are sure to have a smile on your face as you enjoy your meal here. That’s certainly what you’ll see on the faces of the staff and their family members who often frequent the restaurant. And if you’re lucky, you might even catch Ravi’s son Makao, who just turned four, there to cheer on his dad.