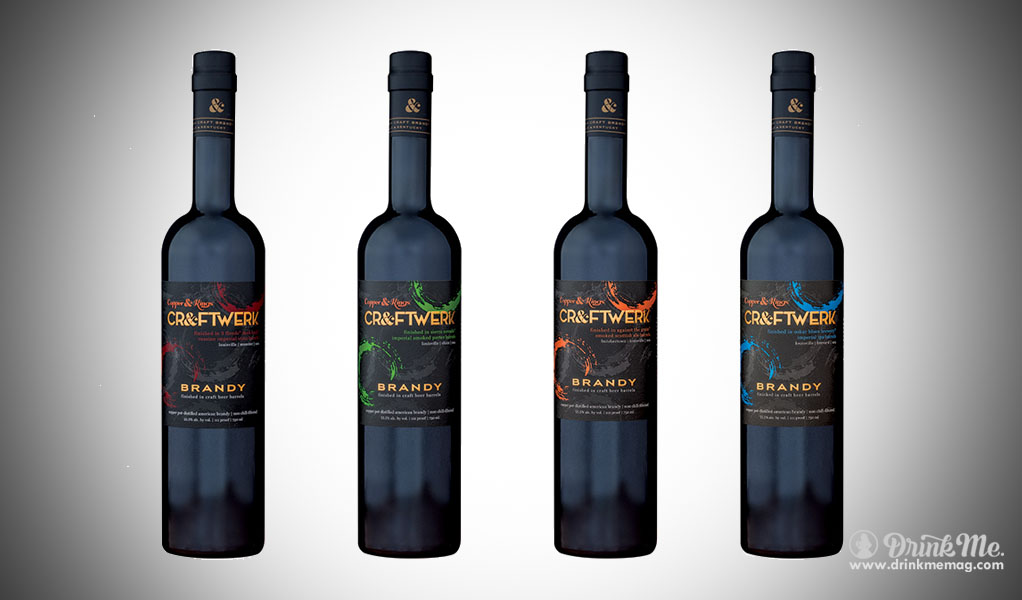 Brandy distillate is a bit like a human teenager. It’s incredibly sensitive to the surroundings in which it’s allowed to mature, picks up characteristics easily, and sometimes has a fresh mouth. Okay, it never really talks back, but the rest is true. So aging brandy in barrels that formerly housed abundantly-flavored craft specialty beers like Sierra Nevada’s Smoked Imperial Porter or 3 Floyds’ “Dark Lord” Russian Imperial Stout is a pretty neat trick dreamed up by the Louisville-based Copper and Kings American Brandy Company for their new series of brandies called CR&FTWERK.

CR&FTWERK consists of a collection of limited batch American brandies, each aged for at least one year in oak barrels, the prior occupants of which were some beers we cherish in their own right. Along with Sierra Nevada and 3 Floyds the collaborating breweries include eclectic favorites Oskar Blues and Against The Grain.
Copper and Kings founder Joe Heron explains: “We have always been inspired by the imagination, fearlessness, and balls-to-the-wall creativity of American craft brewers”. Seems to us that Copper and Kings have a touch of  the old “balls-to-the-wall” creativity themselves.

Imagine a craft brandy imbued with the deliciously malty, dark chocolatey, earthy essence and rich coffee and molasses so prevalent in a good Russian Imperial Stout. That brandy distillate is really getting raised right—if only teenagers could be restricted to such favorable maturation conditions.