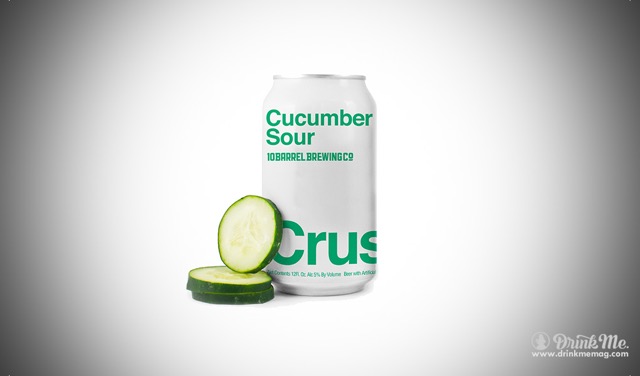 The versatility of cucumbers has never been at question. We love them in cucumber and tomato salads, shredded with fresh dill and Greek yogurt in tzatziki, or cured with sugar and vinegar into sweet and savory bread and butter pickles. Cucumber slices placed on one’s eyelids can even alleviate swelling and soothe the skin with silky coolness. But cucumber beer? Cucumber Sour beer? This we were compelled to try.

10 Barrels’ Crush Cucumber Sour is a welcome addition to the myriad sour flavors circulating the craft beer scene. It is indeed, well, cucumbery, in the ultra refreshing way that the infused water you get at fancy hotels and spas is cucumbery. We’re aware this isn’t a legitimate word in the English language, but for today’s discussion it is. Along with the cooling notes of lush cucumberiness (too far?) Crush displays tangy notes of lemon and earthy wheat flavors.

Technically a Berliner Weissbier, Crush has an ultra low IBU of only 4, and alongside a mild ABV of 5%—several of these refreshing brews are easily “crushed” on a sunny afternoon. If you’re cringing a little, the answer is no, I couldn’t avoid tying in a crushed beer can analogy. Cheers!

Next post China & Cocktails: The Things You Never Knew