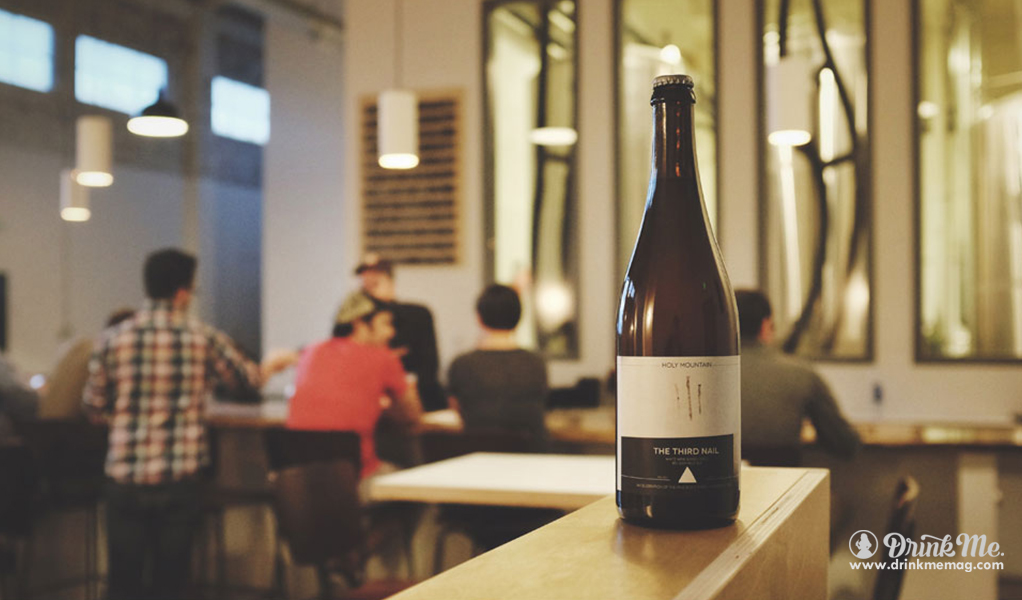 Tucked away in Seattle’s unassuming Interbay neighborhood, Holy Mountain Brewing Co. is one of the newest beer geek destinations in the city. Its taproom officially opened in January 2015, much to the delight of those who had previously tasted its sanctified suds at release parties and special events. From the entrance on Elliott Ave., pilgrims pass through a corridor that leads to a long, hardwood bar and handsome seating area. The ever-changing draught list, laden with oaked and brett-conditioned offerings, is written in chalk on the black panels that mount a whitewashed wall. Make no mistake: these newcomers are not novices. In a city that is saturated with pale ales and IPAs, the brewers at Holy Mountain devote their depth of knowledge to crafting unique takes on common styles by blending in original cultures and barrel-aging many of their brews to produce a delicate and complex signature. The stainless-steel kettles and tanks that bear their delicious libations shine behind the long windows above the taps, imparting a feeling of stepping in to a laboratory where experimentation is standard practice and outcomes are limitless. When the weather is nice, the large bay door in back is drawn up, making the taproom an especially refreshing venue to enjoy a crisp Watchman’s House Common Lager or Astral Projection IPA on a spring or summer afternoon.

About the Author Brian Donkersley

Brian Donkersley has been writing about and recommending craft beer since a whirlwind tour through Belgium introduced him to the heavenly taste of trappist ales. He has since sought out new beers to sample in nearly thirty countries and homebrewed with a Palestinian who honed his skills making illicit grog in a bathtub. Currently a resident of Seattle, WA, Brian makes the most of the occasional sunshine by improving his “raffa” technique in a friendly game of bocce ball and planning numerous trips to the Cascade and Olympic Mountains.