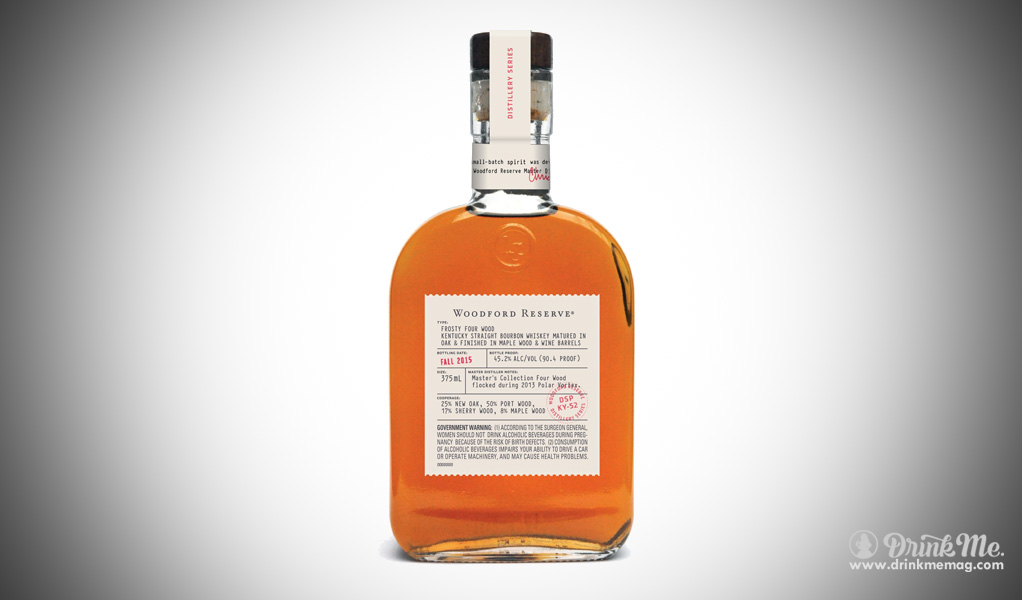 The four woods in question in Woodford Reserve’s Frosty Four Wood  Kentucky Straight Bourbon are the American oak barrels in which the bourbon was aged as well as the port wood, sherry wood, and maple wood barrels in which the whiskey was slowly, meticulously finished.

“Frosty” refers to the polar vortex of 2013 which caused record low temperatures in Kentucky as well as down the whole East Coast of the United States. The 2012 release of the Four Wood (non-frosty) Master’s Collection was at the time being stored in glass bottles in Woodford’s suddenly frigid Kentucky warehouses. The rapidly plummeting temperatures caused flocking, a mineral precipitation occurring within the stored bourbon.

The filtration techniques employed by the master distillers at Woodford resulted in a fruit-forward bourbon with a rich maple undertone. Of the importance of Frosty Four Wood in Woodford Reserve’s heritage, Master Distiller Chris Morris explains:
“Frosty Four Wood is the last of a historic whiskey specialty, as the original Four Wood was the first of its kind to touch four different barrels. It represents a rare moment that extends beyond bourbon and amplifies current flavors found in Woodford Reserve.”
The third release in Woodford Reserve’s Distillery Series, Frosty Four Wood  is a buttery, mildly spiced bourbon with pronounced flavors of almond, maple, and dried apricot. It definitely has the warming effect to see one through the next polar vortex.

Next post Waterford Brings Elysian Glamor To The Table