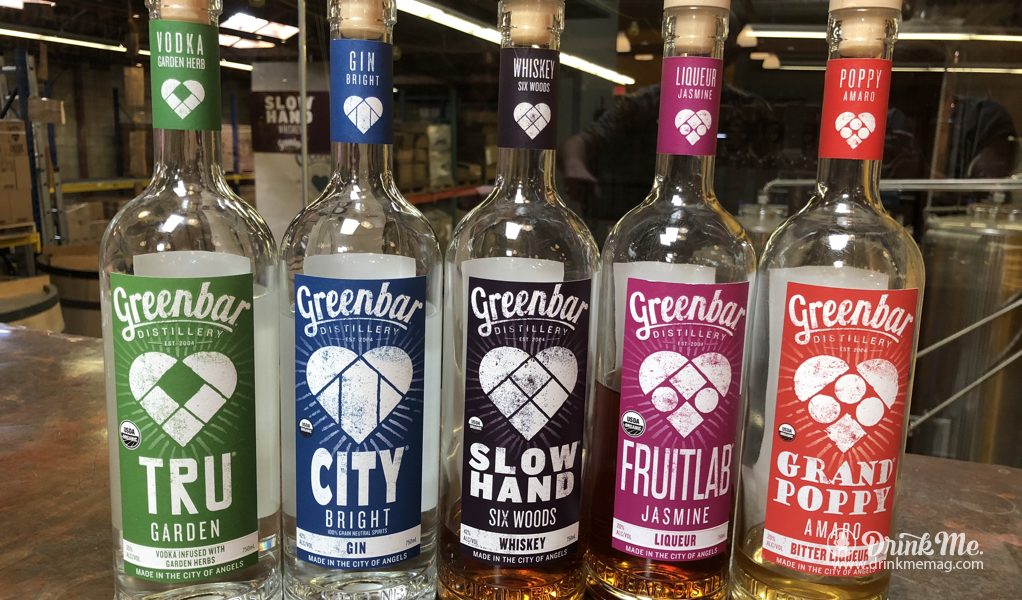 Do you remember as a child saying “But why?” and “Why do I have to?” Sometimes your inquiry was met with a sensible response like “Because if you don’t sleep, you won’t be able to get up for school in the morning.” Other times however, and far too often perhaps, you were told “Because I said so” or “That’s just how it is”. Well for Litty and Melkon, “Why aren’t we doing this differently” may have provoked furrowed eyebrows and smirking tuts based in insecurities from the alcohol industry, but the couple chose to respond humbly and authentically with “Let’s try something new because our way makes a lot of sense too”. Let me explain.

What started as a “crazy home project” according to Litty Mathew and Melkon Khosrovian, co-founder and spirit-making husband-and-wife team, has turned into the world’s number one distillery in organic spirits. 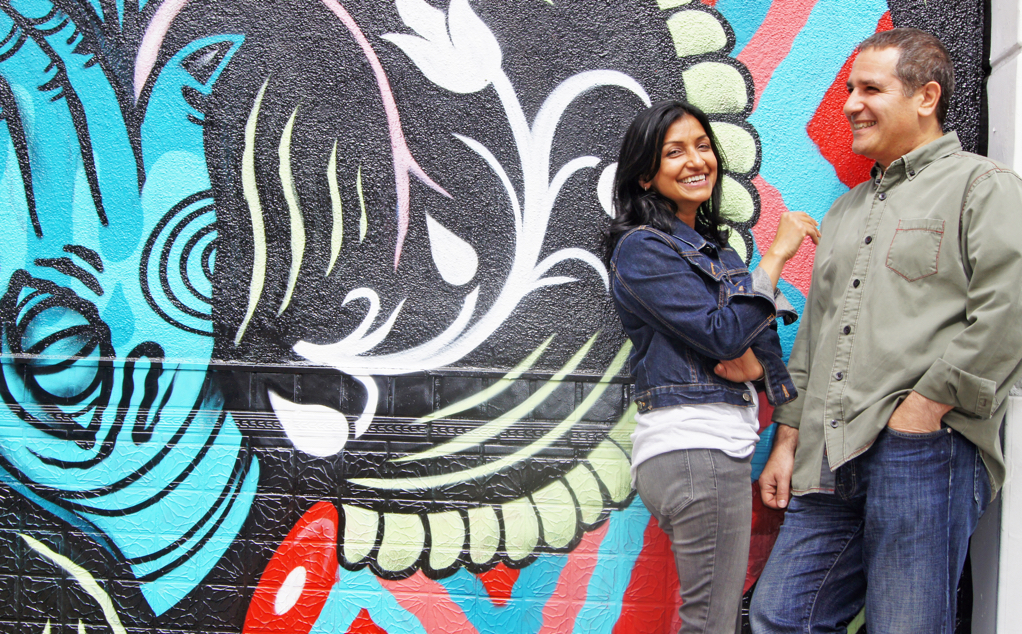 Los Angeles-based Greenbar Distillery is driven by one goal which is flavor, and its motives are driven by how to achieve flavor. If necessity is the mother of invention then Litty and Melkon are the parents of bartender solutions (like the company’s newly launched orange bitters), and consumer accessibility to craft cocktails (that is, how to make a simple cocktail taste like a recipe with great depth).

Upon meeting the duo one is immediately struck by that common denominator found across all astute and perspicacious people: they listen. They listen to the wine industry, the beer brewers, the farmers, the bar space and to cocktail enthusiasts. And, they ask the important questions. What is needed, wanted, missing from the mixology world? What can winemakers teach them about fermentation? How can they incorporate the knowledge of brewers who have dedicated themselves to the study of the effects of yeast combinations? How will organic farmed ingredients affect the final product? What does the technology world have to teach them about efficiency and even sustainability. By listening, and keeping open minds, and without a heritage to protect, Littly and Melkon have freed themselves from convention and discovered new methods where others imagined they were not allowed to delve. 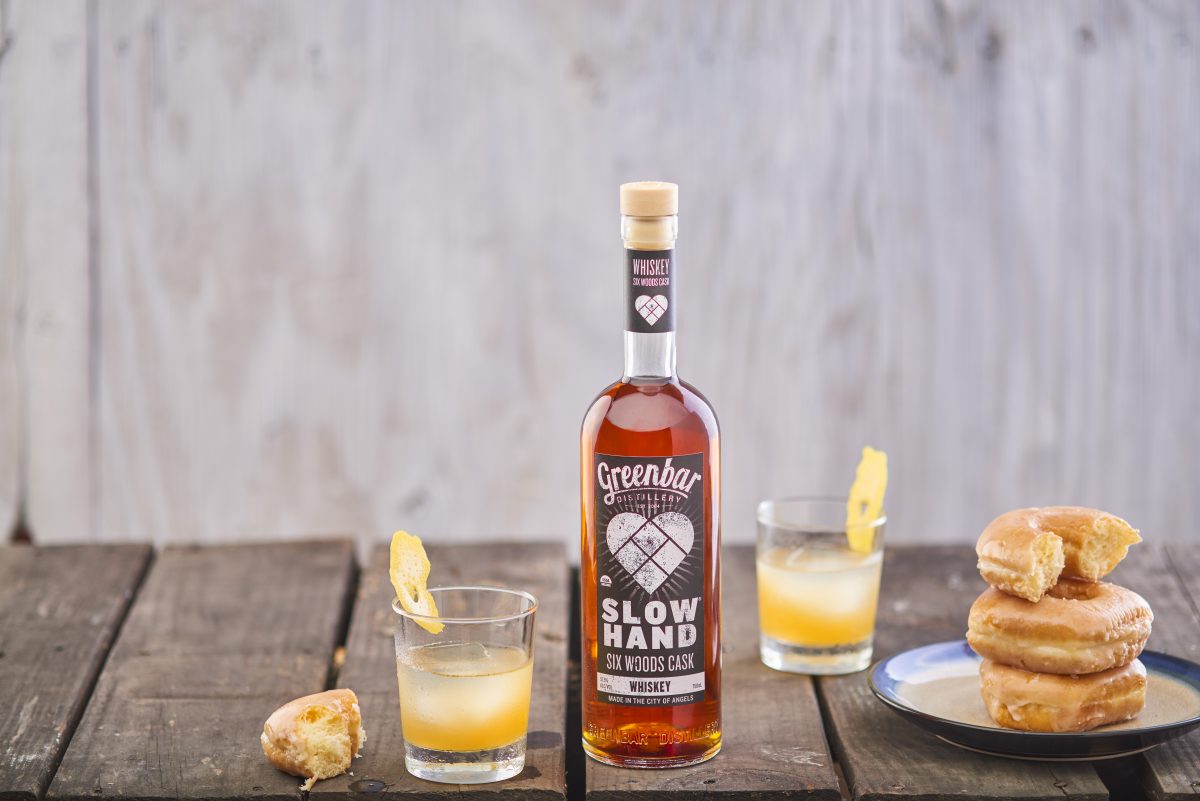 Case in point: whiskey. White Oak is the wood used to make the barrels in which whiskey is aged. Some barrels, are French, some are American, some are used and some are new. But all are White Oak. This is important because barrels give whiskey its color and much of its flavor. So why would the industry always use the same wood? Really, there’s no truly substantial reason, except for it’s always been that way.

Litty and Melkon aren’t out to undermine any spirits-making methods, but they are out to explore others. Spirits fans seem to want the same thing in new whiskeys that they want in every type of alcohol: something exciting and different, yet familiar and relatable. It took us a while to wrap our heads around how to make a whiskey like this,” says Littly.

We finally settled on a radical idea: to expand the flavor profile of whiskey beyond white oak, the wood everyone uses to make barrels, to the rest of the forest. After all, whiskey gets all of its color and 60-80% of its flavor and aroma from wood. So, we thought, why not woods?

“Every tree has a flavor, like fruit or spices. Let’s use it more as an ingredient and less as a container. In 2012, we sampled about 30 different species and settled on six — mulberry, hickory, grape, red oak, maple and of course white oak. We age them in 1,000 and 2,000 gallon white oak, leak-proof casts and place house-toasted staves of the other, leak-prone trees, on the inside for a one-of-a-kind American single malt. The breadth of flavor goes beyond any whiskey ever made yet tastes strangely familiar, like the lovechild of a burly bourbon and an elegant Scotch.” 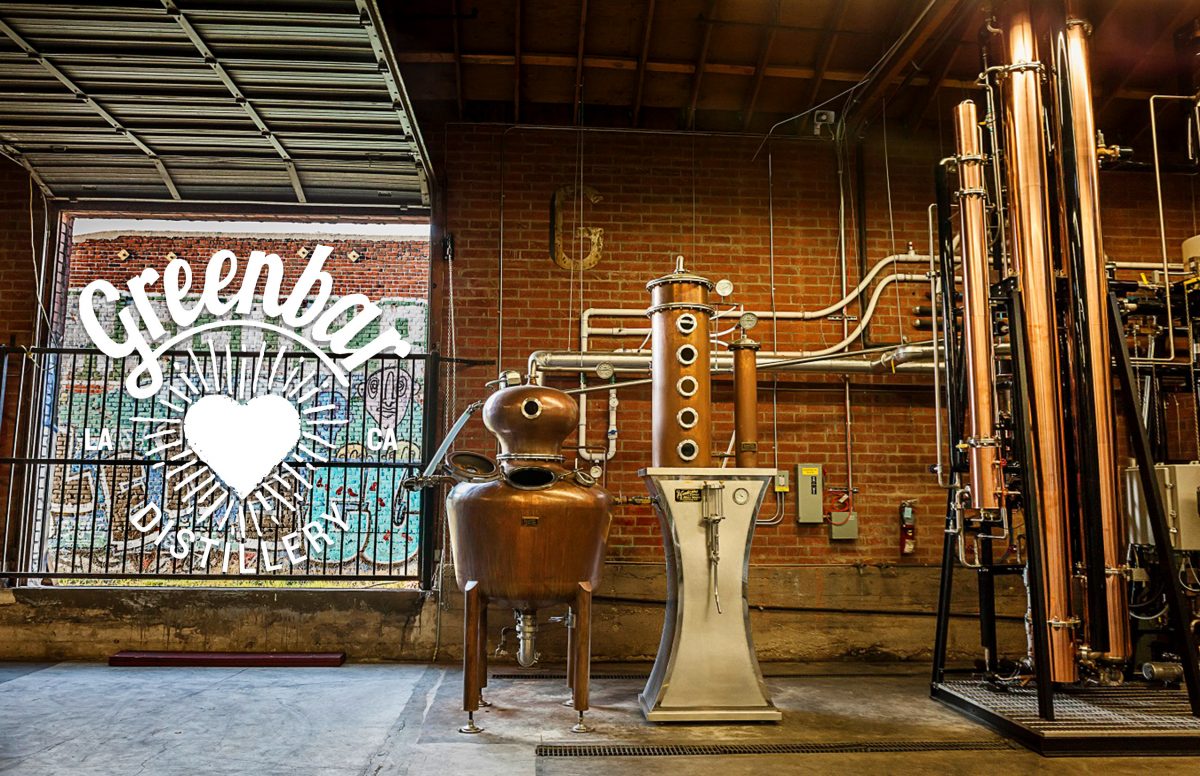 The logo of Greenbar is simple, and while the company’s ideas aren’t simple per se, they are, well, pure, and in line with Litty and Melkon’s personalities. And the products, althought complexly arrived at, taste and feel simple. Could it still be true that in 2018, you just can’t fake this stuff. The consistency that is found only in conviction always separates the authentic from the contrived in the end. Even the Greenbar logo has a heart in it, because this was a business created from passion, by two people very much in love with each other as well as with entertaining friends and family, crafting cocktails and paying it forward.

“It wasn’t like we sat in a conference room and came up with the idea to be more honest. It’s a reflection of who we are and what we want to contribute as people. That’s what led us to planting a tree per bottle sold 10 years ago and feeding the hungry in California per CITY Bright gin cocktail sold this year,” Litty explains.

Customers seem especially drawn to Greenbar’s more flavorful offerings, at least as an introduction to the portfolio. Most people discover the brand through a spirit like the floral amaro, GRAND POPPY, which is inspired by the couple’s walks in the California hills. Meanwhile, members of the L.A.-food scene which is currently gin-crazy often enter the Greenbar gates via CITY Bright. They eventually migrate to TRU vodka, although over the last five years vodka has taken a bit of a backseat in the company’s lineup.

Greenbar’s FRUITLAB liqueurs have exploded in popularity in restaurants and bars for two reasons according to Litty. “Firstly, they’re packed full of flavor so they can add a fun twist to any familiar cocktail. Hibiscus Margarita, anyone?” she offers with a laugh. “Secondly, we put in a third less sugar than comparable liqueurs to give bartenders more control and to make sure that our customers don’t end up drinking sugar bombs. With all the packed flavor in our liqueurs, you don’t miss the sugar.” 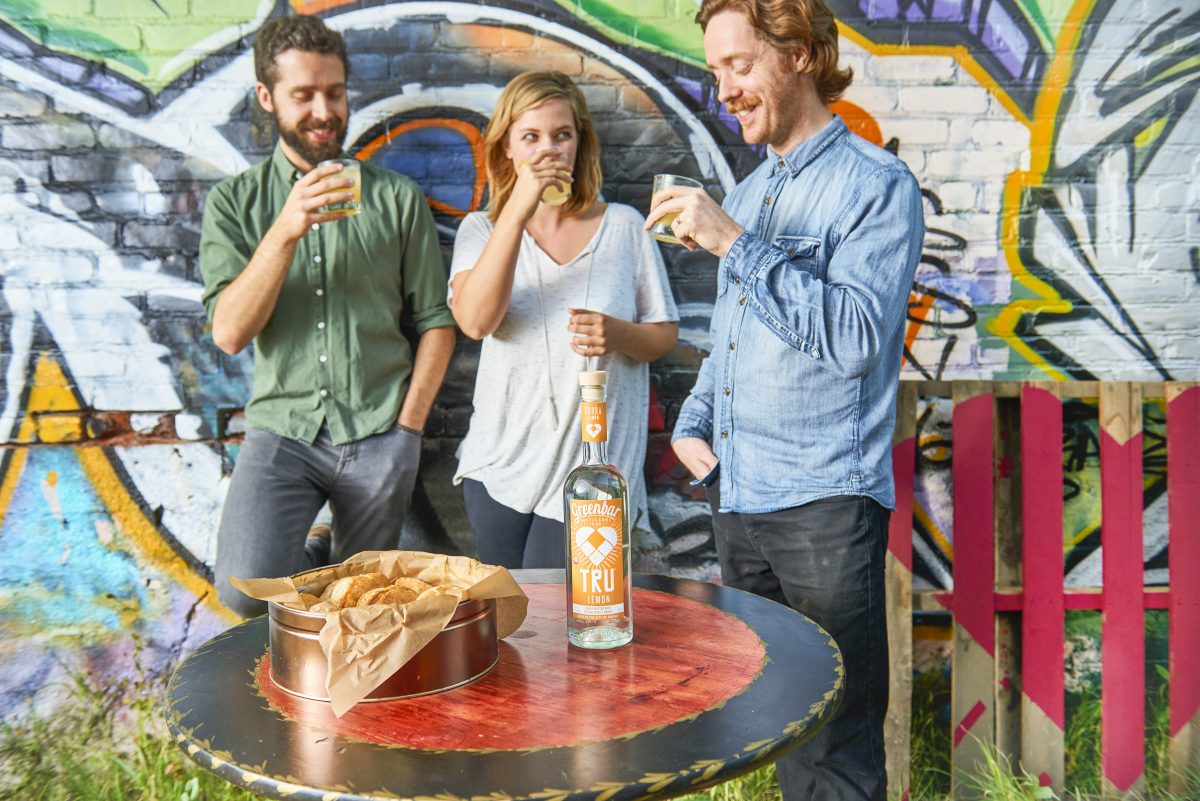 Visitors to the distillery can taste two amari, GRAND POPPY and GRAND HOPS. They’re both floral and while Litty and Melkon love them equally, GRAND POPPY is the runaway hit. “It’s our attempt to bottle California, starting with the star ingredient: California poppies,” says Litty. That velvety, orange colored state flower is blended with ingredients that take the heady floral aroma deeper with layers of citrus, coastal herbs, berries and bitter roots. The finished spirit behaves like a classic European amaro but because it tastes like nothing out there, it somehow transcends the category. Everyone from cocktail geeks to casual something-and-soda drinkers have made it one of Greenbar’s top-selling spirits.

Most recently Greenbar launched BAR KEEP Orange Bitters. You’d be forgiven for thinking that the world doesn’t need another bitters brand, but it doesn’t need another whiskey either. However, start talking whiskies aged with multiple woods and now you have a new category. That familiar tale of innovation goes too with the creation of BAR KEEP Orange Bitters. 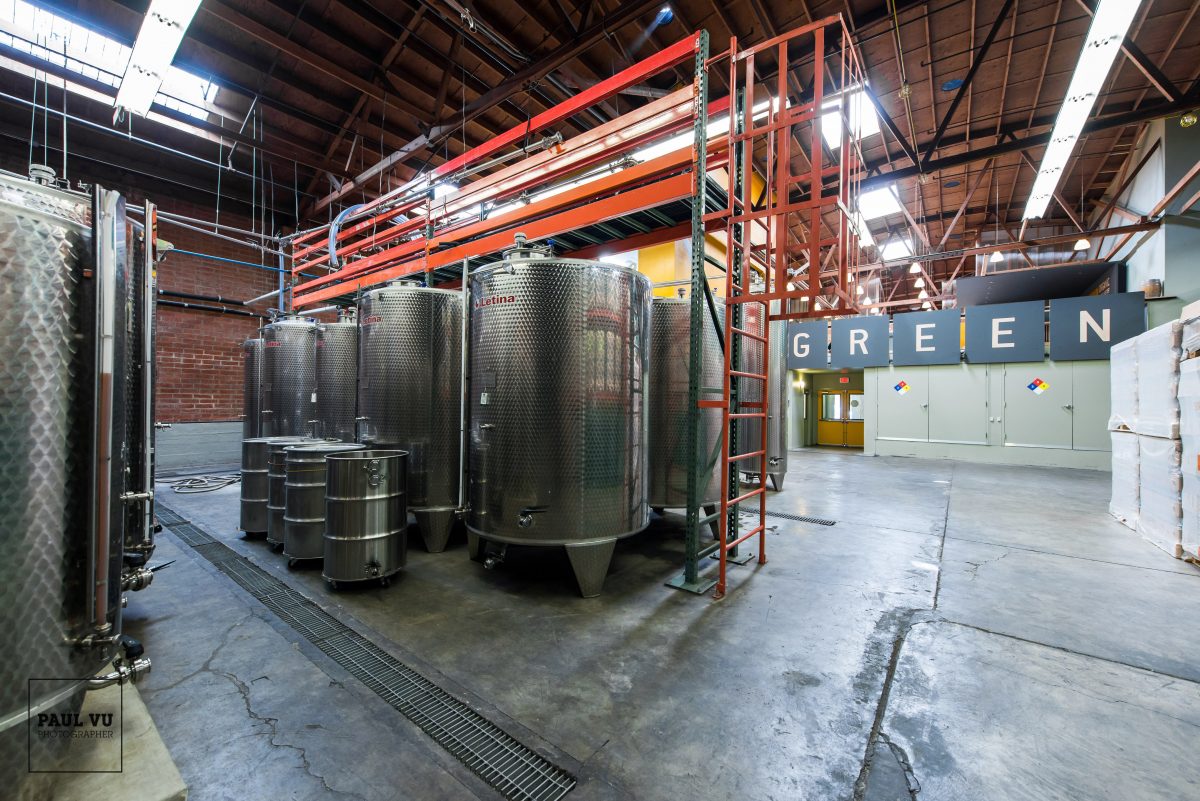 “While there are tons of orange bitters out there, we couldn’t find one that tasted complete or powerful enough to properly balance a drink with a few dashes. Bartenders kept having to pour dashes like there was no tomorrow and combining two or three different kinds to their drinks to produce the aroma and depth they needed. Our new orange bitters should solve this long-standing conundrum.”

The truth is the alcohol industry is stuffed with whiskies, vodkas, gins and even bitters. Unless the product has something to say and some place to be, it’s unlikely to make a dent in even the smallest, most targeted demographic. Greenbar isn’t just another distillery, it’s a new way of distilling born out of insight, humility and authenticity. It’s doing what hasn’t already been done, and it’s listening to suppliers, other industries and to the bar space and cocktail aficionados who cherish spirits organically engineered for their exact purposes. All of this combined with loving what you do and a gratitude for your inspirations (environment, immigrant restaurants, demands within the mixology space), is, it would appear, what it takes to be the most relevant producer of organic spirits in the world and one of the most innovative distilleries to enter the alcohol industry in decades.

Upon your next visit to L.A. ditch the tourist traps, and make an appointment to tour Greenbar Distillery.