Hanging Out with Mr. Cooper: An Interview with Ger Buckley 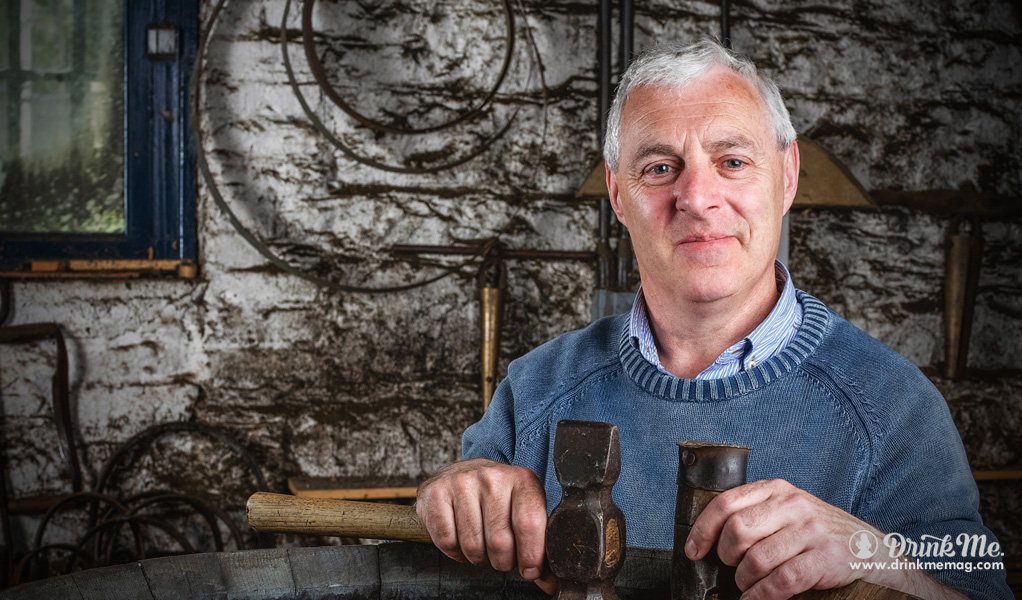 In the 1850s, more than 10,000 coopers worked in Ireland, but today, there are only four people that carry the title of Master Cooper. Ger Buckley, Master Cooper of Midleton Distillery where Jameson is made, is a fifth generation Irish barrel maker (at least that’s as far as his family records go back; he estimates he may be as much as fifteenth generation). He took some time away from the axe to chat with Drink Me about mastering the art of the barrel.

Rachel Barth: How do you become a “master” of coopering?

Ger Buckley: Basically, it comes down to time, trying to master your craft over 20, 30, 40 years. The rule of thumb from long ago is once you’ve trained an apprentice, then you can consider yourself a master, because you’ve been good enough to be chosen to train. So the apprentice we have at the moment, I’m his master, but it comes down to dedication and time. You’re not going to become a master after ten years. It has to be much longer than that. It is really trying to master every single technique I use in repairing or making a barrel.

Does anybody cooper by hand anymore?

What I do is somewhat unique, in that I still am able to work with traditional tools. It’s a very mechanized trade now, and I’ve had coopers in my shop, working for 30, 35 years, who’ve never seen a cooper’s axe in operation. There’s no need for them anymore…I’ve tried to keep those traditions alive, and will pass them on to the next generation. I think it’s important to pay homage to the past and the people who came before us…

Who was your master?

I trained directly under my father, which in another way is kind of unique. Not many people get to train under their own dad. I have great memories of it, unless I was out too late on a Saturday night and had to face him, but apart from that…I’ve been trying to come up to the standard of my father all my life. I believe I’m there now. I could say I am as good as he was.

Did you always know you wanted to cooper? Or did it take coaxing?

I actually grew up in an old abandoned distillery, and the smells of the wood and the whiskey in particular were tremendous. When I was five or six I lived in the city in Cork, and the distillery was only 500 yards away. When I was a boy, I used to go up and visit my dad.  It’s a funny thing to say that my best childhood memories are the smell of whiskeys, but it does bring back my childhood and good memories of going up to see my dad and all the other coopers at the cooperage. They’d always give me some money when I was leaving to buy something in the shop. That was in the 60s…I still call to the old coopers and visit them. It’s a brotherhood.

Did you ever toy with other professions?

I think everybody in their career looks for a life change when they’re young. I took six months leave in 1987 with a girl I was with at the time, and I had a fantastic time, but I couldn’t wait to get back to Ireland and I couldn’t wait to get back to coopering. I think you kind of have to go away, or do something else, to really appreciate the craft you have. When I did come home, I was more passionate about what I did, and I was more interested in the history and the stories and the tools. It was a good experience to go away, but it was better coming home.

You have two daughters. Are they planning to continue the legacy?

I have a daughter that I took to New York; we were two hours in the city, and she fell totally in love and has been living there since. She’s going to London now to study psychology. My youngest daughter is 13; she doesn’t seem to have the desire either, so my hope is that maybe a nephew will go into it, so they’ll be the sixth generation.

How was getting the job for you?

The position came up at the right age for me, and I did one interview and I got one job. I was hired in 1977. I was extremely lucky –to get into something that really is in my blood. I can feel that craft, the way I work with my hands. It’s in the blood. I would never want to work in anything else. I do a lot of carpentry, woodturning, furniture-making at home. I’d go home and make a table or a bowl. I never stop working with wood. I never stop wanting to learn about wood, but my first love is obviously oak.

Do you ever sell your personal works?

I end up giving most of it away because friends love it and because I love it. I’m not in it for the money. It’s tremendous therapy, it’s tremendous satisfaction. When I’m working repairing a cask, the whole world disappears. I just do it naturally, and then look at a clock, the next four hours have gone by. I step back in history, repairing a bar like my dad did, or a cooper 1,000 years ago, or a Roman cooper 2,000 years ago. I’m working in exactly the same fashion, and the same tradition, working with my dad’s tools, and my grandfather’s tools. I can’t put into words how special that feels, except to say that that’s why I wanted to keep working as a cooper repairing. I just love working with barrels. It might seem silly, but I just enjoy it too much.