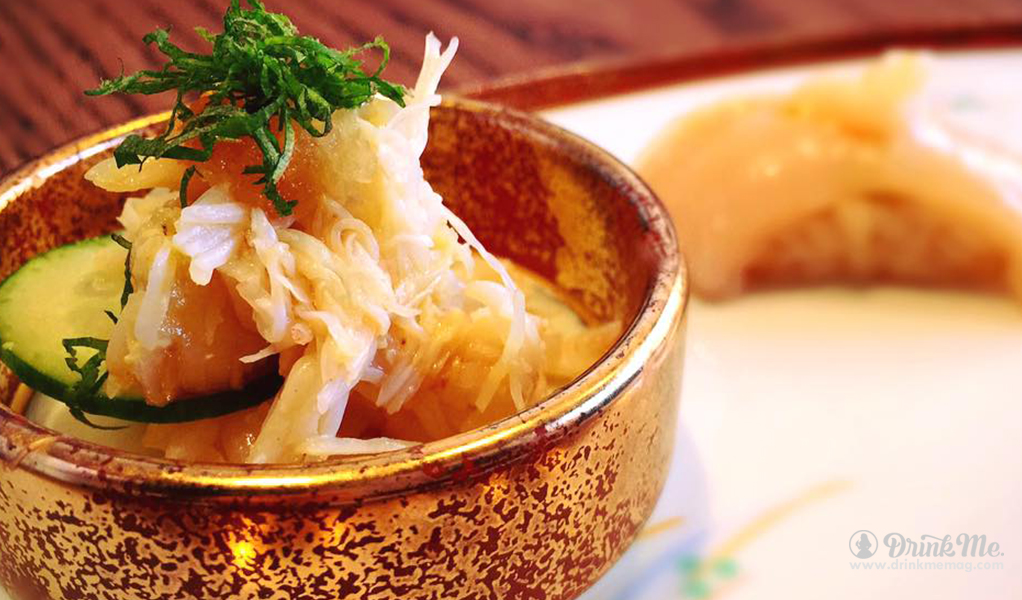 A traditional Japanese prix fixe omakase menu restaurant has opened up earlier this year in San Francisco’s Russian Hill neighborhood. Kinjo’s kitchen is headed up by Michelin-starred Executive Chef Takatoshi Toshi who has teamed up with Ijji Sushi co-owner and chef Bill Kong and co-owner Kua Chuang to bring to SF the Japanese experience of dining in a neighborhood restaurant where the community gathers to not only eat, but enrich each other’s lives.

The debut menu is a $120.00 prix fixe and is the first in the United States to incorporate traditional edomae Japanese technique into a sushi style menu. The oldest fishing company, which has been around for more than 130 years, predominantly supplies the fish for a traditional taste of Japan. The table-focused omakase (translated to “leave it to me”) service offered at Kinjo involves exquisite choreography and affords the restaurant’s guests a unique dining experience. Guest and chef interactions are encouraged to facilitate a lively atmosphere. Once the prix fixe omakase menu has been ordered, you may order select items on an a la carte basis at the end of the meal. Libations available at Kinjo include an engaging selection of sake, plus wine and beer from premier sources.

Chef Toshi was most recently at Sushi Ran in San Francisco where, for over 10 years, he was awarded a Michelin star, won first place for the United States in the 2015 Global Sushi Challenge and was awarded a gold medal at the 2014 World Sushi Cup in Japan.

Overall, Kinjo is the culmination of their unwavering focus to the purity of the fish and the expression of their devotion to traditional Japanese techniques. Go on and experience this fidelity to their beliefs as it is evident in every dish you will be served.

Previous post The Good Tequila Is The Kind You Should Be Able To Drink For Years To Come: Greenbar Distillery Ixá Añejo