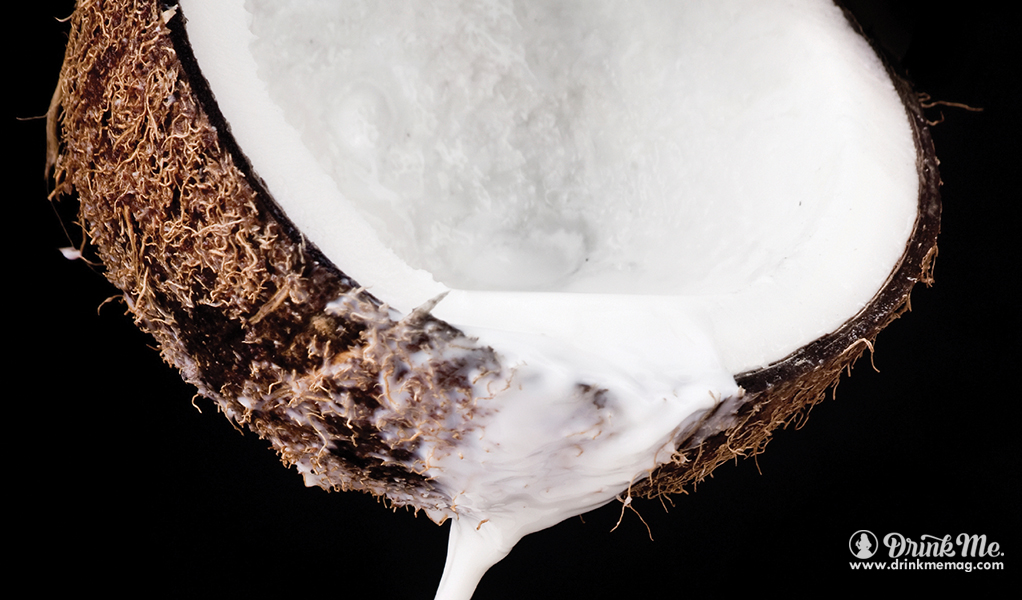 Coconut cream is the piña colada’s best supporting role (coconuts are not nuts at all but are a drupe fruit). Coconut, to me, however, belongs first and foremost in Hawaii’s quintessential Maui CoCoNut Porter. I’ll never forget when I visited the brewery and co-owner Garrett Marrero pulled out a baking sheet filled with freshly toasted, coconut flakes hot from the oven. The suntan aroma and deep blonde color were ravishing.

CoCoNut Porter is a sumptuous, sensual beer, and judges at the World Beer Cup have bestowed it with a gold medal. Every time I sip it, even back on the Mainland, I’m transported to Maui’s island paradise. And that’s what coconut does, no matter how far it lands from the tree.

Maybe that explains why coconut-infused beers have taken root beyond the Tropics. Coconut-flavored beers are practically more popular in northern climes than in tropical. It’s part of the notion that all great beer is like a vacation in a bottle.

The best coconut beer I’ve ever had is Stone’s Kona Coffee Macadamia Nut Coconut Porter from California’s San Diego County – coconuts galore there! The Porter was a one-time collaboration between Stone Brewing and the aforementioned Maui Brewing, who served as the original inspiration. The trifecta of hearty Hawaiian flavors rounded it out perfectly. It truly captured the essence of the Pacific’s hedonistic treats.

Incidentally, Stone’s coconutty experiments didn’t end there. The brewery recently released a three-way collaboration beer, R&R Coconut IPA, keeping the toasted coconut but adding a hoppy IPA base. At the same time, New Belgium in Fort Collins, Colorado, surely a place graced by no coconut trees, released Coconut Curry Hefeweizen. The creamy and steamy brew didn’t exactly taste like a bowl of Tom Yum Gai, but the addition of cayenne, kaffir lime leaves, and more is one of the most creative recipes commercially brewed with coconut.

Farther north in Salem, Oregon, the small, new Santiam Brewing makes a delicious, gluttonous beer called Pirate Stout. It’s a tropical stout aged in rum barrels before toasted coconut is added for a week prior to kegging. The rum barrels were floated to Santiam by the Rogue Ales subsidiary, Rogue Distillery, so at least there’s some sense of terroir in this Oregon coconut beer.

Northward still, Washington reigns supreme making more coconut beers than Hawaii; this is not surprising once taken into account how many more breweries are in Washington. In the Pacific Northwest, the yearning for balmy skies runs so strong that the cold and misty state produces some of the nation’s best coconut beers. Thanks go to Hale’s Ales, Black Raven, Wingman, and morei.

Wingman’s Daniel Heath explained that, “Washington craft brewers are focused on making high quality beers and experimenting with flavors. Coconut is a fantastic additive to beer and is a popular food. So it makes sense for brewers to want to add this flavor to beer.” It also follows that most of the ones that are only offered seasonally are released in the winter – when one most needs to feel as if sunny days are only a flung bottle cap away – but Wingman’s Coconut P-51 Porter is a summer seasonal.

Also appearing only in the summers, Coco Loco is exclusive to the Dogfish brewpub in Rehoboth Beach, Delaware (it’s a rather cold beach). This blonde ale contains both toasted coconut flakes and coconut water. This brings up a final matter that’s both antithetical to, and the crux of, craft brewing.

Nationally, breweries are boosting the shift toward using only locally-sourced ingredients. In this way, Maui Brewing’s CoCoNut Porter and Kona Brewing’s Koco Brown Ale are logical developments. But brewers also enjoy the challenge of brewing with any ingredient they can get a hold of. Take, for example, another Dogfish Head retired beer: Cloudberry Imperial Wheat. Whatberries? Cloudberries are tart, amber berries that only grow in far-northern latitudes. They are so valuable that in Scandinavia blood has been shed over their cultivation. Obviously, Dogfish Head had to brew a beer with them. Founder Sam Calagione found a way to source them from the Arctic Circle. “The challenge wasn’t just the cloudberries, but the expense of getting them safely to the brewery,” he recalled.

On the sustainability spectrum, at least coconuts and coconut water are cheaper and easier to obtain.

It’s not only American craft brewers shaking the coconut palms. Just as the fruits are a rare sighting east of the Rockies (or off the Big Island in general), craft beer is surprisingly uncommon in Edmonton, Alberta deep in Canada. Yet that didn’t stop the brewers at Alley Kat Brewing from concocting Heatseeker Coconut Curry Porter, kicked up with chili heat. And that’s precisely the thesis. Frostbitten Canucks in Edmonton can’t shimmy up a coconut palm, nor is there any cause to slather on Hawaiian Tropic, but they can soak up the that essence with each sip of Heatseaker.

Hawaii isn’t the only Pacific island where you can find a coconut porter. Go back up north to Canada and its Swans Brewpub and Hotel in Victoria on Vancouver Island. There, you can always catch a band to listen to while sipping a traditional pint of bitter ale, or try their more exotic Coconut Porter, which has earned a gold medal at the Canadian Brewing Awards. Victoria is hardly tropical, but it’s nine breweries still make it a paradise. And as more and more breweries enjoy their time in the sun, we can expect more of them to explore the complexities of this simple drupe.

About the Author Brian Yaeger

Brian Yaeger is the author of Red, White, and Brew: An American Beer Odyssey and Oregon Breweries. He contributed to the Oxford Companion to Beer and is a frequently published by All About Beer, Draft Magazine, CraftBeer.com and his locals in Portland: Portland Monthly and Willamette Week. He spent a year living in Amsterdam hunting the best stroopwafels. He runs Inn Beervana Bed & Beer along with his wife, Half Pint, their son I.P.Yae, and German Shorthair Pointer, Dunkel.