On the Zombie Trail: Tiki Bars, Bad Movies, and the Island Fetish 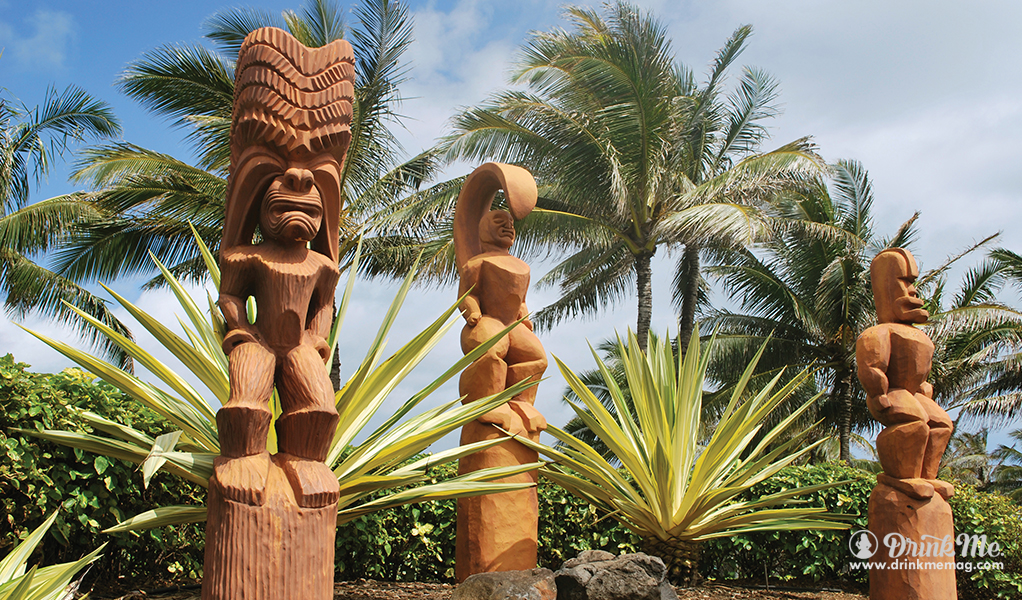 Our Zombie story begins in Haiti.

Well, not really. Actually, there are two different zombie stories, and they both begin in Southern California in the early 1930’s with a singular fascination with the mystery and exoticism of island life.

The first story opens on a fictional Haitian dirt road north of Hollywood. Young lovers plan their impending nuptials on a carriage ride outside of would-be Prince au Port. At a stop in the road a sugar mill owner and Haitian Voodoo master Murder Legandre – played by none other than Bela Lugosi – creeps out of the dark woods around them followed by four catatonic slaves.

“ZOMBIES!” yells the driver. He cracks his whip and they rush off to their destination, housed somewhere in Universal Studios, and finish filming White Zombie, the first Zombie film.

Meanwhile, down in Hollywood proper, a Texan by the name of Ernest Gantt opens his first bar after several years of traveling the Carribean and South Pacific. He dubs it The Beachcomber and decorates it with driftwood and curios in homage to the laidback exotic ethos of Polynesia. He starts slinging signature rum-based cocktails.

Legend has it a businessman with a hangover and an impending meeting asked Gantt for a cure. The bartender obliged with a novel concoction of rum fruit juice and cinnamon syrup. The next day the businessman returned, and when Gantt asked how it went the man replied –

“I felt like the living dead! It made a ZOMBIE out of me.”

With that the Zombie cocktail (along with the Mai Tai and the like) became a progenitor of an island-themed drinking movement that would soon enchant a generation of Americans.

While Zombies in film represented a fear of the mysterious Others encountered in our island exploration, The Beachcomber’s Zombie cocktail and its fruity brethren embodied an idyllic island escape enjoyed by Hollywood elite and middle-class suburbanites alike. Gantt – who identified so wholly with the beachcomber vibe he changed his name to Don Beach – moved his bar across the street where it became Don the Beachcomber. Seeing how enthralled guests became with escapism, imitators soon began to spring up such as Oakland’s Victor Bergeron – known as Trader Vic.

The Zombie cocktail became even more popular when it was debuted at the 1939 World’s Fair by a copycat bartender. Our neighbor’s in the Pacific Rim received another nod of approval from an 80-foot statue of an island goddess at the San Francisco Golden Gate Exposition that same year. The Māori totem, Tiki, came to be used another way – as a souvenir cocktail mug – and also, finally, gave the movement a name.

World War II’s end brought the return of thousands of soldiers who, stationed in the south pacific and Caribbean, brought back a taste for all things Island. The Tiki fad moved beyond the Don the Beachcombers and Trader Vic’s franchises and all the other bars that had blossomed. Tiki idols started popping up in front yard, Aku- Aku Hotels sprung up with their monolithic mascot, there was even a theme park. The Mai-Kai opened in Fort Lauderdale and began serving Don the Beachcomber’s Zombie (it still does to this day).

But the country’s love affair with Tiki culture eventually waned. The Beatles had Americans’ ear to the East, and the Space Race had them looking to the sky. The growing generation gap brought a youth culture that shrugged at fruity cocktails and opted for a myriad of other new exciting substances. They saw the tacky backyard luau parties of their parents and tiki bars full of topless hula girls as examples of rampant Imperialism and chauvinism and denounced them along with the Vietnam War.

Around this time enters George A. Romero’s Night of the Living Dead. Filmed in grainy black and white film akin to the grisly newsreels of the time, Romero’s undead ghouls held a mirror up to the military industrial complex, racism, and a fear of a new frontier beyond the horizon – space. These new Zombies became a blueprint for hundreds of films to come.

Tiki cocktails had their own resurrection in the late ‘90s. A thriving economy brought a new leisure class that harkened back to the fun and innocence of previous generations. Swing dancing was cool, Squirrel Nut Zipper topped the charts, and the Big Bad Voodoo Daddies were featured in the film Swingers. Dusty, derelict tiki bars were ironic and hip places to hang. Beachbum Berry’s seminal “Grog Log” chronicled his search for original Tiki cocktail recipes, including Don the Beachcomber’s Zombie. Sven Kirsten’s “The Book of Tiki” told thrift store junkies they were anthropologists as they hunted for Tahitian women painted on black velvet and Tiki Bob’s mugs. Mai Tais were back, baby!

And just like with any revival, today’s bartenders are putting a modern twist on these dusty island drinks. Now our Mai Tais are fresh and organic, Zombies are sustainable and gluten-free. Our bodies are our last bastion of defense and must be well maintained if we want to, you know, outrun the walking dead.

Place all ingredients except ice cubes and mint sprig in a blender. Blend on high until frothy but not slushy, no more than 5 seconds.
Pour into a tall, narrow glass and add ice cubes until full. Garnish with a mint sprig.

About the Author John Flores

John Flores is a would-be scientist turned craft bartender, photographer, burgeoning gourmand and contributing author at DrinkMe magazine. A jack of many trades, John has been dubbed The Hungry Mongrel—a voracious mutt of many disciplines. He can be found eating and drinking his way through Oakland, California, on a teal Peugeot named Pascal.

Next post Craft This, Craft That: We Explore What CRAFT Actually MEANS!

Previous post Chill Out, And Make Warm Beers A Thing Of The Past