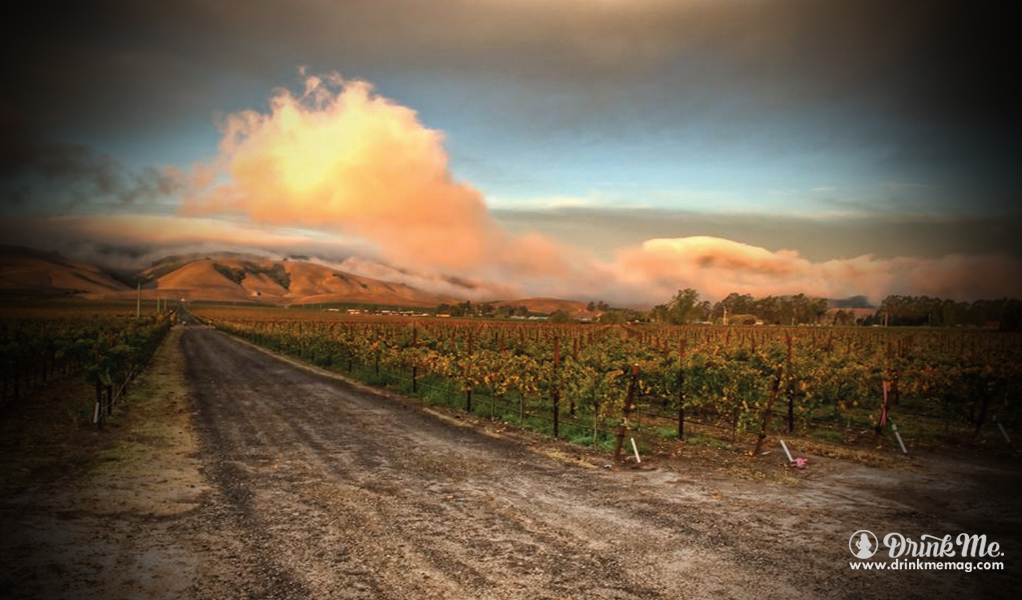 “This road is littered with winemakers who have tried to make wine here,” says Greg La Follette, careening in a rickety pick-up through a winding and narrow dirt road with shear drops into the ravines below. We’re bouncing along the road to Manchester Ridge Vineyard, a place where La Follette has come since 2008 to make what some call one of America’s best pinots. Contrary to what you might assume from the treacherous drive along cliff-hanging narrow roads, nothing as dramatic as fiery end-over-end wrecks did in the winemakers who have come and left empty handed. They suffered a more metaphoric demise when their harvests failed to produce anything drinkable.

Viticulturist Martin Mochizuki first planted this remote vineyard on the Mendocino coast in 2002. It is accessible only by an unpaved and pockmarked path that passes grazing herds of cattle and enormous uprooted redwood stumps. It is one of the most difficult places to grow grapes on the North Coast, and, says La Follette, potentially one of the most rewarding.

Grapes in Northern California generally have a pretty easy life, lazing away in sunshine most of the day after fog supplies a cool morning. Rain hardly ever is factor enough to deliver the thick furry carpets of botrytis and vineyard molds that threaten to devour entire harvests in Bordeaux. Nor is California’s wine country subject to the heat and hurricanes that assault grapes growing on New York’s North Fork, a sandbar more known for resorts than for its up-and-coming winemaking. Farther still from the minds of California growers are the so-called marginal environments. Such places are just on the edge of where it’s possible to grow grapes. Take Santorini, Greece, where one hundred year old vines grow in pure ash (the result of a 17th Century eruption that destroyed nearly all life on the tiny Aegean island) and are trained low to the ground and woven into “baskets,” a ancient method winegrowers employed generations ago so that vines wouldn’t snap under fierce coastal winds or succumb to intense heat.

It is rare that we would talk about a vineyard in Northern California in the same breath as these places, but there waits Manchester Ridge like a winemaker’s Kilimanjaro.

Manchester Ridge is located within an AVA (American Viticultural Area) called Mendocino Ridge, the only AVA in California made up of non-contiguous parts. One of the defining characteristics is elevation, and the pieces of the AVA (principally three ridges above 1,200 feet) poke up through the clouds here and there like wine-growing islands in the sky, separated from each other by the lower elevations between them.

The Hana of this archipelago would have to be Manchester Ridge, situated at 2,200 feet facing the Pacific and bearing the full brunt of direct arctic blasts. And, in contrast to its southernly counterparts in Napa and the Sonoma Coast, the ridge gets pelted with rain, sometimes as much as 200 inches a year. The growing season is slow to start, buds peak out as late as mid-July some years, as opposed to early June and even May or April in most of the surrounding AVAs. When the fruit finally plumps, it hangs for a very long time. La Follette, with characteristic nonchalance, recalls harvests that have stretched to Thanksgiving, when he and his crew have camped out on the ridge swaddled in parkas and tents to complete the harvest. A very long time, indeed.

If Manchester Ridge is an island, La Follette is a castaway, at times clinging to a piece of driftwood to stay afloat.

In the third act of his winemaking career, La Follette now processes his Manchester Ridge grapes into wine close to his home in Sonoma.  But, he has made pinot all over the world, hopping hemispheres for decades as an in-demand consultant. Formerly a professional bagpipe player, who bagged the pipes when he realized that might not be the most practical vocation, La Follette went on to get degrees in plant biology and chemistry. He now brings all of his experience to bear in Manchester Ridge, practicing what he calls “carbohydrate repartitioning,” coaxing everything he can from the vines shivering out on the Ridge. He’s also been known to play the vines an encouraging tune, and, in fact, on the drive up to 2,200 feet and along the spine of a mountain range, his bagpipes slosh back and forth in the rear of the cab.

La Follette’s route to making a wine that bears his name is nearly as circuitous as the one we took to reach the top of the Manchester Ridge where we surveyed the vines with their backdrop of the Pacific crashing into rocks far below. He has made his career by seeking out distinct vineyards at two sites, Sonoma County and Manchester Ridge, to make tremendously varied single-vineyard pinot and chardonnay, and he turn out just a few hundred cases each. It’s a rare treat to walk a vineyard with La Follette, but he can often be found close to his home at his new tasting room in The Barlow in Sebastopol. But vineyards that require as intense scrutiny as Manchester Ridge don’t leave too much time for idling about.

“You’ve got to spend time in that vineyard,” La Follette says; wine can literally die on the vine. There are vintages such as 2010 in which La Follette was the only winemaker to make wine from the AVA. Those vintages are enticing, spectacular even, with exotic aromas that draw you down into the glass, and a feral, wild quality that must be earned.

“I’m not a fair weather winemaker,” La Follette says, explaining why he spends so much time at Manchester Ridge even in years that seem hopeless. “If you pay attention to what this land is saying and listen and get it right, you get wildly rewarded.”

The vineyard has something to say even in the years that the vines are at their most demanding. As La Follette says, “The land still needs to be heard.”

La Follette wines can be tasted at the winery’s tasting room located at The Barlow, 180 Morris Street, Sebastopol. lafollettewines.com

[NOTE: “Manchester Ridge” Vineyard is the vineyard on the first of three ridges in the AVA called “Mendocino Ridge.”]

About the Author John Capone

John Capone lives atop a mountain between Sonoma and Napa Valley where he engages in copious amounts of intense first-hand wine and spirits “research” while listening to old Hawaiian and rockabilly records. He’s written for New York, BlackBook, Radar, The Daily, Sonoma Magazine, Hemispheres and [wherever]: an out of place journal. Additionally, his work has twice been selected to be featured in the Southampton Players one-act festival in New York; he’s edited the magazines Hampton Style and Hampton Sports, a lit mag called Proteus and served as executive editor of MediaPost. He’s also edited three Zagat guides and now works as a designer for Gundlach Bundschu. His cabin is full of unpublishable private literature and corks.