Sunken Champagne: Aged at the Bottom of the Sea 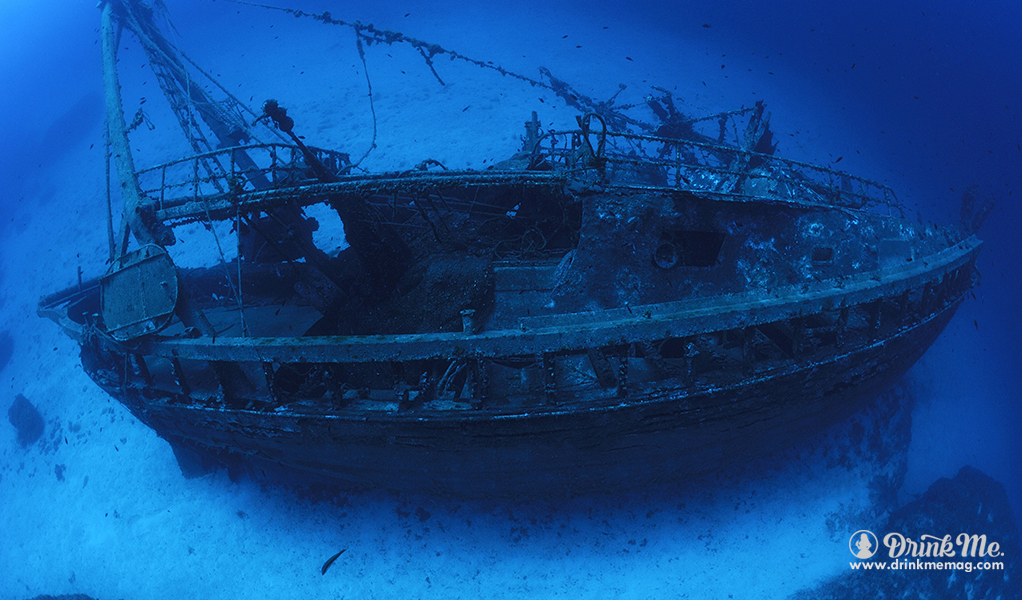 With alcohol, as with life itself, we enjoy a pronounced fondness for graceful aging. Women continue to fawn over Harrison Ford and Robert Redford as they approach their 80s. 55 year-old Kim Cattrall was continually portrayed as an object of desire for younger men in Sex In The City. Oenophiles, of course, go gaga over wine sitting in cellars, uncorked for decades. But perhaps nothing is as coveted as ‘shipwrecked champagne‘–bottles of French bubbly banished to the bottom of the sea for ages.

In 1916, during the height of World War I, a Swedish freighter known as the Jönköping (good luck pronouncing it) was sunk by the Germans in the Gulf of Finland. The doomed vessel came to rest some 200 feet below the surface where it lay for more than 80 years before rediscovery in 1997. When salvaged, wine lovers the world over were elated to learn that among the items retrieved from the wreck were 2000 bottles of 1907 Heidsieck & Co. Monopole Diamant Bleu Cuvée.

Eventually some of that excitement was tempered when news came that only a select few of those bottles were drinkable and that they would be fetching unimaginable fortunes at auction. Just how much, you may wonder, to bring home a bottle of hundred-year-old champagne from the bottom of the sea? If you think a quarter of a million dollars sounds excessive, you’d be undervaluing this cuvée by around $25,000. That’s right–at the astronomical sum of $275,000 per bottle, the Monopole Diamant Bleu shattered records for alcohol sold at auction.

If that seems absurd beyond belief, that’s because it is. Yet those fortunate enough to try one of the world’s most exclusive glasses of champagne swear it’s the most sublime swill to ever wash over their tongue. And maybe they’re not just trying to convince themselves. It turns out that conditions were just right for perfect preservation. The specific depth of the shipwreck provided six atmospheres of pressure, ideal for aging champagne. Additionally, the temperature of the water and the near absence of UV light insured that no degradation of flavor occurred. Indeed, it only got better with time.

If you are thinking about procuring a bottle (invite me over please), it should be noted that the nose of the shipwrecked Cuvée is said to contain a distinct, briny, flinty sort of pungence. Tasting notes mention an intense, burnt citrus blast of flavor, accompanied by the ever-alluring tones of pine sol and kerosene. These peculiarities could explain why the prices of remaining bottles dropped significantly once people came to their senses.

And after all, why settle for 1907 shipwrecked champagne when you can sample a vintage far more exclusive? Two years ago, Swedish divers found a treasure trove of rare bubbly scattered along the bottom of the Baltic Sea. The bottles–168 in total, were traced back to early 18th Century France. One of them, a Veuve Clicquot from 1831, fetched $38,000 at auction.

These colossal figures leave me with a burning question: why didn’t I become a deep-sea diver? After all, shipwrecked bottles of beer, scotch, and wine are regularly found along old trade routes. Unfortunately, much of that booty is spoiled and not fit for human consumption, let alone enjoyment. Not to mention the outside interests all vying for a piece of the action. That $38,000 Clicquot, together with more than $100,000 worth of bottles found alongside it, were all claimed by the Swedish government, owners of the water from which they were retrieved.

No matter who profits from it, you have to wonder about the people buying it. Are these deep-pocketed connoisseurs actually paying for the flavor itself, or is it more for the bragging rights, the exclusivity of tasting something with such historic pedigree?

There’s no question that red wine, whiskey or anything barrel-aged, for that matter, develops greater complexity; a more nuanced flavor profile. To wit, observe the prices paid by beer enthusiasts for certain cask-conditioned ales. But the argument can be made that a properly constructed cellar or natural cave is an environment far better equipped for proper aging than a cemetery below the sea.

When it comes to getting older, it’s often said that age is merely a number. That’s a lie. With it comes a compilation of greater experience and interesting stories to tell. This is why from day one we are taught to respect our elders. It’s probably why we also learn to respect aged alcohol. It has more to impart. And when it comes to fermented fortunes from the bottom of the sea, those stories are more interesting, the lessons far more enlightening. That’s the price you pay.

Next post Test Yourself With Our Intriguing 9 Alcohol Facts: How Many Did You Know?