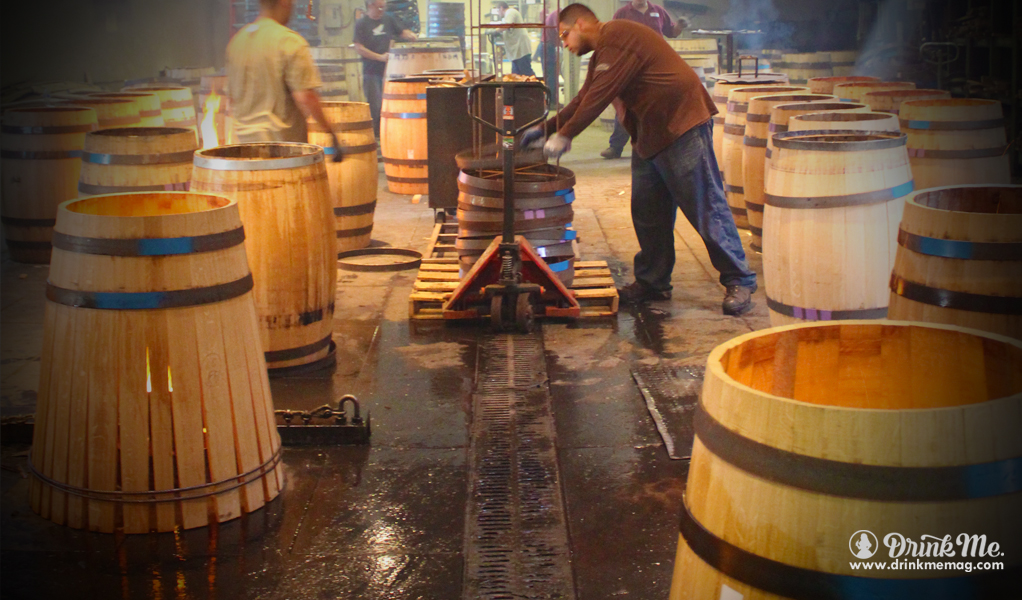 Flames erupt from wooden canisters, wrapping the factory in a sheath of oaky smoke that turns incandescent under the ceiling lights. The white oak barrels are charred from the inside, their interiors turned a charcoal black that cracks and blisters under the heat. There is the sound of metal on metal, as rings are hammered tight around warm wood. Barrels are rolled onto conveyers, and lasers are burning the maker’s mark. Here, woodworkers create the casks that shape the whiskies we clink graciously in glass. It’s dreamlike, but this is the reality of a cooperage, or barrel-making factory.

Whereas it once took a man a day to make a few barrels, today factories churn out over a thousand per day. Here’s how it all goes down.

Barrels were crucial to the shipping industry for centuries, used for storing and transporting all sorts of goods around the world. In fact, coopering has been practiced from Egypt to Ireland, and dates back over 4,000 years. The word “cooper” stems from “cuparius,” the name for those who made casks during Roman times.

But with the growth of mechanization, more efficient vessels for storing and transporting goods have arisen, minimizing the need for the barrel and its maker. Today, barrels are used almost exclusively for flavor, for adding nuance and a smooth texture to wines and spirits. Coopers are there to guide the process, repair, build, and honor the craft’s history and tradition.

Beyond wood variety, the age of a barrel is also crucial to imparting flavor. According to Don Livermore, Master Distiller at Wiser’s Canadian Whisky and one of only a few master distillers to have a PHD in brewing and distilling, wood virginity is as important to the flavor-process as the duration a whisky is aged. “The very first use of a barrel, the virgin oak barrel, you’ll get four to five times the vanilla caramel toffee than you would get in a once-used American bourbon barrel,”

Livermore said. “In fact, you’ll get more vanilla caramel toffee in 60 days of aging than you will in 18 years in a used barrel. It’s wild.”

In fact, according to the Federal Alcohol Administration Act, whisky can only legally call itself “bourbon” if it is, among other things, aged in a new charred oak barrel.

First, staves – the pieces of wood that make up the body of the barrel – are prepared. The wood is air and kiln-dried, which strips the wood of its 85% water makeup. Flat, dried oak boards are then sent through a planer, which cuts the wood into sections about 2.5 cm thick. This wood is traditionally quarter-sawn, which means it’s cut so that the tree’s rings form nearly right angles with the wide face of the wood. Cut this way, the wood is least likely to warp or cup, and is most resistant to water and humidity. It’s no coincidence that Kentucky’s two greatest industries – bourbon and baseball bats – both use quarter-sawn wood.

The heads – the tops and bottom of the barrel – are made by pegging staves together with hickory then sawing the connected staves into circles.  Forming the body takes a bit more grit. The staves are narrowed at their ends, which leads to that characteristic barrel shape with a smaller radius at the ends than in the middle. Then, the staves are positioned inside an iron hoop, lining it with as many staves as it takes, usually around 32, so that there is minimal gapping between the pieces. Now, it’s time to bend. Traditionally, with whisky barrels, steam is used to moisten the wood into a malleable state, which, lassoed by the metal rings, can curve into the form of the barrel. Once moistened, the wood expands, creating enough friction and pressure between the staves to meld them into a liquid-tight canister.

Then it’s time for charring. Barrels pass over a gas-burning conveyer belt that shoots flames into the wooden barrels, burning the interiors. Smaller factories still use fired wood chips to impart the toast. The barrels are extinguished by water, leaving the wood heavily toasted. Essentially, this cooks the wood, extracting its flavors so that the whisky can absorb it in aging. While wine maintains a light to medium char, whisky barrels receive a heavy toast, so the spirit will have the greatest potential to grip those cooked wood flavors. (Also, the traditional distillery-sized barrel is 53 gallons as opposed to 59-gallon wine barrels).

The iron hoops used thus far are replaced with stronger, galvanized ones. The new rings hold the barrel into its curvature, so that it won’t spring apart. A groove is carved into the barrels to slot the heads into place, and a spout (known as a bung hole) is punctured into the center of the barrel for pouring. The barrel is filled with water for until it is cool. Then it’s time for the finishing touch: lasers or brands burn the maker’s block mark, or symbol that signifies the maker and quality of the barrel, into the wood. The barrel’s ready to roll.

Whereas wine barrels are sanded and shined for display at wineries, with whiskies, a scuffed barrel is just fine – it’s about palate, not pretty.

Though coopering is an industry known for tradition over innovation, as demand for whisky climbs (in 2013, whisky supplier sales spiked 6.2%, to $7 billion in the U.S. alone, according to the Distilled Spirits Council), distillers and coopers are toying with new woodworking techniques to meet demand.

Buffalo Trace Distillery in Kentucky has tried using specific tree sections, building extra-large barrels, and performing extra-long chars. Seguin Moreau from Napa carves grooves inside some of their barrels before charring – a process known as U-Stave, which adds surface area, and results in heightened wood flavor.

In fact, many barrel makers and distillers are looking into alternative barrel techniques to stave off an oak shortage. Some are reusing old casks, re-charring the insides to make them like new. Some are blending from different types of pre-used barrels, like port or sherry casks, which also infuse the whiskies with hints of whatever was previously aged in them. Some are experimenting with different types of wood like maple or cherry. Some are using charred oak chips and tank staves instead of barrels to infuse woodiness into their spirits.

However, these new tricks are for a very old dog and the long-standing craft of barrel-making, born of sweat, and yielding sweet, will surely thrive as long as the world’s love affair with whisky.